Here I am on May 10. I lost six pounds during the weight loss challenge I accepted two months ago. I have gained it all back. Not sure if I am heavier than when I started, but my final weigh-in will reveal the results on Saturday. I’m disappointed in myself. But I can’t complain, because even without having completed this challenge, I have learned.

I have learned that when it comes to exercise and changing my food intake I need a routine, and when that routine is altered due to circumstances I have no control over, it creates anxiety that cripples me. I started off this program successfully going to the gym or working out at home regularly. Four weeks in, I hurt my back and was unable to complete any workouts that week. The next week, still recovering from the back pain, the workouts I did were much slower and less involved. At that point, the Y began a renovation process. They moved every piece of equipment for cardio and strength into different rooms. The flow of my routine was interrupted.

In the midst of that, every week the wellness team was presenting us with both nutrition and exercise challenges. New information constantly being introduced to us and it was overwhelming! Some Sunday nights when I opened the email, it was a tidal wave of new material and I was drowning. I had trouble seeing the shore where I could have stepped away, toweled off, sat on the sand to compose myself and consider dipping my toe back into the water. Instead, I just ran away.

I’m a mom! I know I can multitask! But when it comes to making these types of changes, I really need to focus. There are so many nuances with nutrition and exercise, and I need to give myself time to feel confident and secure in each of the changes I’m making. I need to enter slowly into the waters of a healthy lifestyle. I need to get myself adjusted to the feelings that each step makes me experience.

A huge part of my issue is just fear. A subliminal fear that was awakened in me after my heart attack. Hell, a case of bad heartburn and I almost died in my bathroom.  It is pretty easy to pull the rug of confidence and safety right out from under someone when what seemed like a normal day was almost their last. The fact that I can actually use my bathroom is a huge accomplishment (especially since we only have one and can’t afford to move). Now, new things that are going to directly affect my body are things I approach cautiously. 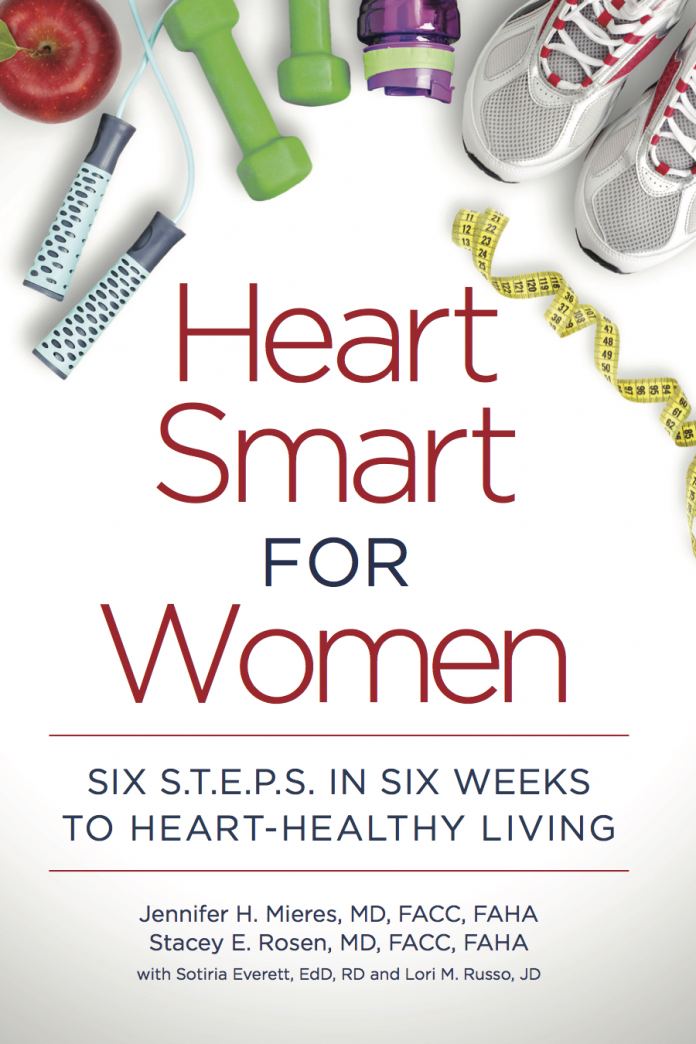 You may remember me mentioning the book  Heart Smart for Women: Six S.T.E.P.S. in Six Weeks to Heart-Healthy Living that I was reading prior to taking on this challenge. Well, I should have just stuck with the book. Drs. Jennifer H. Mieres and Stacey E. Rosen, both cardiologists, did a wonderful job developing this program. I was reading the book, highlighting it, psyching myself up to start the steps, joined the challenge at the Y and put the book down. I didn’t follow through with what they had recommended and I wish I had, but now is my chance. And while it is a six week program, I plan to move at my own pace so I don’t stop taking the steps! I will commit to making changes as I develop confidence enough that I am succeeding with the new routine I put into place so I can add to it and not fail. Knowing two cardiologists developed this program has already instilled a sense of security in me that I can accomplish this.

Signs from the universe appeared this week as I determined that I just need to start fresh.

I received a tweet from the Heart Smart Movement page asking how my reading was going and which S.T.E.P.S. were working for me. Ugh. Well … I have now tweeted this blog as a response to you and if you have gotten this far, you know my answer. I am currently working on week 1 of the program, “WEEK 1 S: Select and stock the kitchen with healthy food choices.” Ironically, our refrigerator broke this week and wasn’t cooling down. As a result, I had to ditch everything in it providing me with the opportunity to start completely fresh.

So now, it is time for me to pull together my shopping list, restock my 37 degree refrigerator and take the time to build my confidence in every change I make. In doing this, I will be better suited to handle the things I have no control over. I can’t stop the waves from coming, but I can prepare myself to face any ripple or swell knowing that I am capable of floating, swimming or surfing my way back to shore.